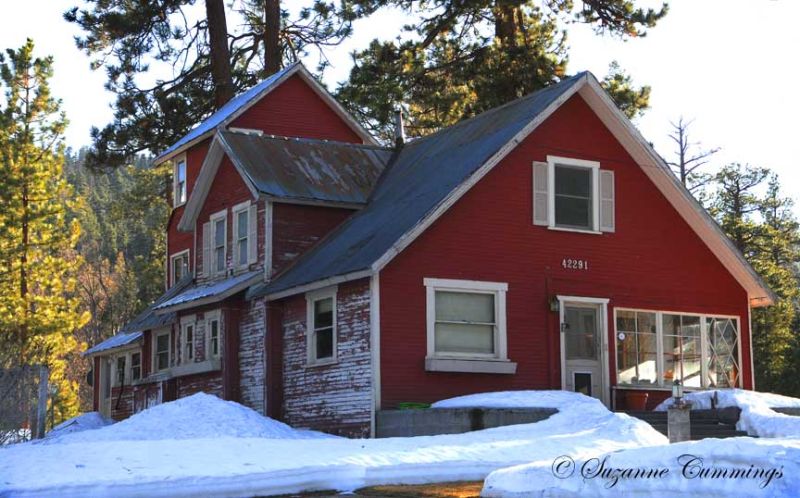 Previous Next
← previous day next day →

Every image I make has this underlying comment: "Here is something that interests me; something I want to show and share with you." -- Catherine Jo Morgan

This is a different view of the house I posted on March 2nd. As I mentioned previously, it was featured in the 2007 motion picture, I'm Reed Fish. I don't know exactly when it was built but I'm reasonably sure it was long before Big Bear became a popular place to go skiing. It sits on a large piece of land just a short walking distance from Snow Summit Ski Resort and appears to have changed very little since it was built. I'm certain there are numerous developers who would just love to get their hands on this property including one who lives in the McMansion right next door.

Superb capture! The red against the snow and the backdrop of the trees is fantastic.

It must be great to live there....

What a beautiful house. It must be quite pleasant to live there!

Intriguing design. It looks like they added on as time passed. Love the light on the tree on the left, as well as the room on the right.

This is a great house. I love when people break the mold and do something different with their architecture. Nicely done.

I love old homes, so much character. This one is fantastic!

AH!! another angle of this incredible house well done! I really love this houses colour

beautiful shot, and i hope anyone who wants to change this place stays as far away as possible!!!

I have and live in a wooden house with the same coloures in swedish style :-))) I like this.

What a cool looking old house. Looks like it was built in stages almost. Great shot!

Another great angle on this house. Nice.

I can relate to your quote today! Old Red is in need of paint but that would cover up all that character!! Great capture and compo!

great shot of this house, I like the angle you choose for this composition, nice place, everything seems so peaceful

Needs some TLC and it could be a showplace. Love your capture.

This home has great potential - wonderful roof lines and the red is perfect! Another great shot. Looks like spring is coming - a beautiful composition Suzanne!

I think the North side needs some work. Great shot.

Snow really does throw everything into a stark relief . . the red here loves it !

great old place. i like the light in that back room. that's where i'd like to be.